Our thoughts are with our friends and colleagues in Oman who have felt the force of Tropical Cyclone Shaheen over the past 24 hours.

Shaheen made landfall in Northern Oman between Saham and Mussanah on the evening of 3 October 2021 between 5pm and 8pm, causing severe flooding and damage to infrastructure and roads.

Throughout 3 October 2021, severe rainfall and flash floods were experienced in the Capital city of Muscat with the following areas having sustained substantial flooding and/or landslides:

There are reports of electrical substations and infrastructure badly affected throughout the Muscat and Northern Governates. Other reports of widespread damage to buildings and commercial establishments have also been received, primarily due to the levels of flooding associated with the turbulent weather.

Weather networks have reported sustained windspeeds between 120 and 150 km/hr, wave heights of between 10 and 12m and rainfall in excess of 100mm. Following impact on land, we have received reports that most Al Batinah regions suffered torrential rainfall and flash floods including:

The cyclone was downgraded from a Tropical Cyclone to a Tropical Storm in the late hours of 3 October. 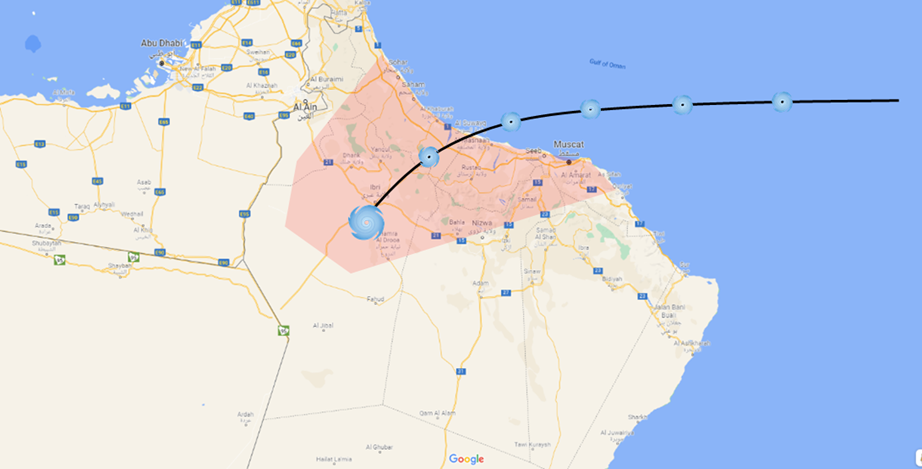 The storm cell currently sits West of the mountainous area of Al Hajar, progressing in a West/South West direction. Areas in the UAE and Saudi Arabia remain on high alert.

If you have any questions, please contact either Niall Metcalfe or Chris Wylie, who will be coordinating our response with resources from across the Charles Taylor Adjusting network.