Charles Taylor Marine Technical Services (MTS) in Australia put their skills towards an important cause when they provided survey services to Lisa Blair, one of Australia's most acclaimed sailors, as she attempted to raise awareness of climate change by becoming the fastest person to sail solo, non-stop and unassisted around Antarctica. All this while conducting sample testing for climate science throughout her journey.

Charles Taylor MTS was approached by Redsky Insurance, Australian Marine Underwriting agents with Lloyd’s Syndicate and Agenta Singapore as their cover holders, to conduct a risk assessment of Lisa Blair’s yacht, Climate Action Now. Redsky provided insurance cover as part of a sponsorship package and, in keeping with this spirit, MTS provided services to Redsky and Lisa at no cost.

The yacht, Climate Action Now, was designed and built for shorthanded ocean racing in the early 2000s, so its robust structure is fitted with full bulkheads and makes little concession for interior comforts – Lisa cannot even stand up in most areas of the boat!

To prepare the yacht for the voyage, the refit budget was set at AUD500,000 for the 14,000nm distance to be covered in an anticipated time of 90 to 100 days. A further AUD100,000 was to be raised for scientific equipment and micro plastic sample testing. 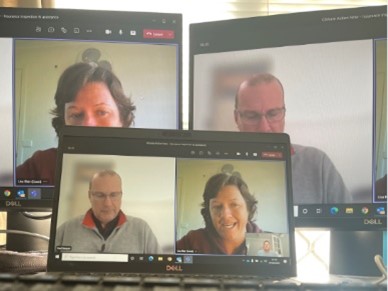 In the midst of strict Covid lockdowns in Australia in mid 2021, all stakeholders had to meet remotely. According to Gary Wilmot, Director, MTS Australia: “In the initial stages, Heather Roberts, a partner from Redsky Insurance, was instrumental in assisting us to understand the risk and scope of cover which included vessel and equipment (including scientific).”

Following a series of remote meetings with Lisa Blair to establish all risks, scope of cover, MTS commenced visits to the vessel, inspections and recommendations.

When MTS attended the vessel, it was undergoing a refit in preparation for the voyage. We used the traditional method of percussion testing as well as moisture meter readings of all the areas of the composite sandwich hull as well as any internal areas that we could access. Percussion testing is a process of tapping the hull with a hammer and listening to the sound. This, in combination with a surveyor’s eyes and ears, has been carried out since the earliest days of ship and boat building and is still the best indicator of a fibre-reinforced polymer (FRP) hull’s condition.

Our survey was thorough and provided Redsky and Lisa with a comprehensive overview of the condition of the vessel.  Throughout the survey, we employed non-destructive testing (NDT) which refers to an array of inspection methods that allow us to evaluate and collect data about a material, system, or component without permanently altering it. Our enquiries and surveys included:

As our MTS surveyor, Paul Stanyon, is a naval architect and has designed and built yachts, we were able to target our inspection and provide advice to the critical structures of the vessel, as well as recommend further inspection by shipwrights to areas that needed more than NDT.

“Given the extreme conditions likely during the expedition, we took a holistic approach and made enquiry beyond the normal scope of a hull risk survey.”

“We wanted to understand how the vessel was designed and built, what modifications and repairs have been carried out over the years, and what was being done in preparation for this voyage,” said Paul Stanyon.

The 2022 voyage is the second time Lisa and her yacht have attempted to break the record of the quickest time and raise awareness of climate change. Her first attempt in 2017 ended when Lisa suffered a dismasting (the rigging wire snapped) in storm conditions more than 1000nm from land. Lisa managed to save her yacht, was rendered fuel from a passing container ship, built a jury rig and motor sailed into Cape Town, South Africa. Two months later Lisa re-started her voyage and made history when she became the first woman to sail solo and unassisted around Antarctica with one stop.

Drawing on past experience, Lisa fitted a larger rudder, mast and sail plan.  Paul Stanyon made numerous enquiries to the suppliers about the new designs to provide Lisa with confidence in the integrity of the new components.

It’s all in the preparation ... and the ending

Paul Stanyon provided expert opinion and advice throughout the months of Lisa’s preparation. Paul attended the sailing trials in Moreton Bay, Australia, at the completion of the refit where a number of issues were identified and rectified.

As the departure point for the voyage was on the other side of Australia in Albany, Western Australia, the nearly 2000nm sail from Queensland to the starting dock was used as a shakedown cruise so that any work and adjustments could be identified and repaired or replaced in Albany.

Once the voyage was completed, our work resumed. MTS assisted with the removal of waste accumulated over the 92 days as not a single trace of waste was discarded by Lisa. Throughout her days at sea, the only materials overboard were scientific buoys which will collect extremely invaluable data for ongoing research.