It seems every year we experience more examples of extreme weather, and 2021 is no exception. Already this year we have seen flooding in Fort Simpson and Tulita, Northwest Territories; tornadoes in Midwestern Ontario, Manitoba, Saskatchewan, and Alberta; significant rainfall and hail in Calgary, Alberta; and the near destruction of Lytton, British Columbia due to a human-caused fire spreading rapidly in extremely dry conditions and high winds.

Further, extreme heat and drought in the west has officials worried about record-breaking wildfire seasons such as those seen in 2017 and 2018. As of July 6, 2021, almost the entire province of British Columbia is in very high or extreme fire conditions, and some 50% of the Yukon Territory is under extreme conditions.

Already there have been multiple close calls and some loss of property related to wildfires. This includes the Cloverdale wildfire within five kilometers northeast of Prince Albert, Saskatchewan; wildfires west of Edmonton, Alberta impacting the hamlets of Evansburgh, Entwistle and Tomahawk; and most recently the nearly 200 active wildfires raging in British Columbia. These are multiple wildfires which are effectively surrounding Kamloops, a community of nearly 100,000. One of these was ignited by lightning between two subdivisions within the city limits coming within 15 meters of some residences, and which was controlled by a prepared fire response, fortunate wind conditions, and the timely arrival of helicopter water buckets. 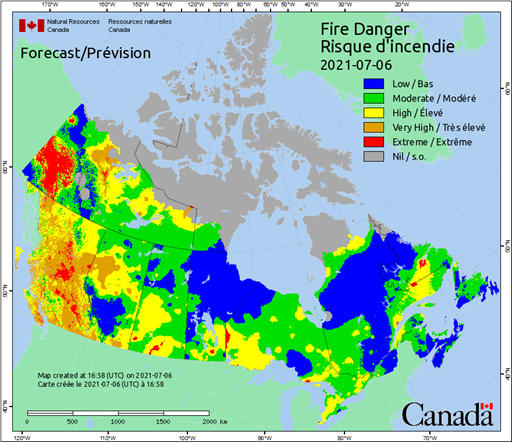 Charles Taylor Adjusting continues to monitor active weather across the country and prepare our adjusting forces to assist when called upon.