The Supreme Court Decision in the "B Atlantic"

The Supreme Court Decision in the "B Atlantic"

On 13 August 2007, after loading a cargo of coal at Lake Maracaibo, Venezuela, a routine underwater inspection revealed three bags of cocaine strapped to the hull of the bulk carrier “B Atlantic”. The crew was arrested immediately and the vessel was confiscated by the Venezuelan authorities under the strict Venezuelan anti-drug laws, despite the owners having no part in the drug smuggling. Eventually, the master and second officer were sentenced to nine years in prison for complicity in drug trafficking and the vessel was detained by the Venezuelan courts. On 18 June 2008, Owners served a Notice of Abandonment to their war risk insurers to recover their loss as a constructive total loss together with sue and labour expenses incurred. 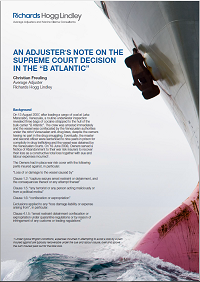